The coronavirus has already ravaged the EU and the US, and Africa has yet to experience the pandemic’s full force. However, most public health experts fear that the worst is yet to come. According to the African Centers for Disease Control and Prevention (ACDC), there are currently 10,000 confirmed cases and 500 confirmed deaths from COVID-19 in Africa. Given the massive problems with testing, medical supplies, quarantine protocols and political infighting in the West, African countries will face challenges exponentially greater if the virus strikes in full force. Their economies, politics and social restrictions further complicate their ability to meet these challenges.

African governments’ responses have varied across the continent, with mixed results. Allegedly a few African countries remain COVID-19 free. Other countries, such as Malawi, the DRC, and Nigeria, have had some success containing the virus, thanks to earlier experience in containing other epidemics such as Ebola. Still others, like Ethiopia and South Africa, have struggled to respond to the economic and social pressures of a complete lockdown.

Now is a crucial time for African governments to learn from the mistakes of others. They have the opportunity now to prepare for the potential shift of the COVID epicenter to Africa. This blog article will provide an analysis of four African states’ responses to COVID-19. While the media may provide generalized accounts of the COVID-19 crisis in Africa for the entire continent, reality is a different matter. In fact, countries, governments, and cultures are reacting to the pandemic in different ways. Africans and other interested observers will benefit more from a more regional and localized analysis.

Algeria is Africa’s largest country geographically. Algeria’s proximity to the COVID hotspot in Italy and its status as a collection point for sub-Saharan migrants traveling to Europe could make this country another epicenter. Currently, Algeria has 2,103 confirmed COVID cases and has the most recorded deaths of any country in Africa at 336. Even so, Algeria’s Prime Minister Abdelmadjid Tebbanoue has labeled the situation as “under control.” Furthermore, the Minister of Health has adopted the ‘Trumpian approach’ of promoting the unproven malaria drug Chloroquine as a viable option for treatment. The minister has implemented a policy that permits any individual who has undergone Chloroquine treatment to leave hospitals after only five days! Most of Algeria is currently under lockdown, and a mandatory curfew is in place. COVID cases are centered in the urban north, in cities such as Oran and Algiers. If the virus were to spread rapidly to the remote and impoverished southern regions, it would quickly overwhelm the rural Algerian healthcare system.

Other factors in Algeria and similar Muslim countries will likely exacerbate the challenge, exposing additional vulnerabilities. The Ramadan fasting season, for example, is approaching. These countries can also expect conflicts over quarantine protocols. The former leader of the Algerian Renewal Party, for example, recently posted on Facebook a call for the suspension of the Ramadan fast in light of the coronavirus pandemic. Neither the Algerian government nor its Ministry for Religious Affairs has commented on the issue. The religious/scientific consensus on Fasting and COVID is still unclear.

The coronavirus has also affected the political landscape of Algeria. This time last year, the country was thrust into political uncertainty, as two decades of authoritarian rule under Abdelaziz Bouteflika ended after mass protests. And the election of Abdelmadjid Tebbanoue in December ignited more protests. Consequently, Algerians’ trust in the government is very low — so low that protesters ignored the government’s social distancing and quarantine measures to protest until March 20th. The Algerian government needs to respond adequately and rationally to a pandemic or face yet greater distrust and more protests. These could cripple the country and increase the virus’ spread. Furthermore, the drastic drop in the price of oil in March will further limit the government’s ability to properly fund a response to the crisis.

Botswana is one of the most sparsely populated countries in the world. Its small, mostly rural population may well be expected to weather the worst of the COVID-19. Yet Botswana has seen rapid economic growth over the past decades and has a relatively transparent, open and democratic political system. The HIV/AIDs epidemic has hit Botswana particularly hard, yet the government has been lauded for its “comprehensive and effective” response to that particular epidemic, by public health officials. The lessons and public health structures developed during the AIDS crisis has and will prove invaluable in addressing the spread of the Coronavirus.

Currently, Botswana has 13 confirmed cases, with no deaths recorded. The government has recently put the entire country under a state of emergency, social distancing/quarantine procedures are also in place. Most recently, the entire parliament of Botswana, including the President Mokgweetsi Masisi, have been placed under mandatory 14-day quarantine after all MPs came into close contact with an infected health worker. Botswana has also closed its borders with its southern neighbor Zimbabwe in late March, after Zimbabwe recorded their first COVID-19 death. Additionally, the cabinet agreed to donate 10% of their overall salaries to the Coronavirus Relief Fund.

The government of Botswana appears to have taken the necessary steps to prepare for an increase in coronavirus cases by enforcing quarantine measures and adequately tracking those who could have potentially been exposed to the virus. However, since much of Botswana’s population is rural and impoverished, a spike in cases could overwhelm the system. Restrictions to movement could also slow or stop the country’s increasing economic prosperity. There is a very important balance to be struck. If important industries like tourism and mining do not resume operations soon, Botswana could suffer a severe financial downturn.

The warzones of the world, such as Syria and Yemen have not yet recorded massive COVD-19 outbreaks. War-torn Somalia currently has 80 confirmed cases and five recorded deaths, though the accuracy of these records is arguably suspect. Somalia presents a worrisome challenge to the world’s response to the COVID Pandemic. Most of its population exists outside the government’s direct control. Access to effective and affordable healthcare is at best nonexistent, and the terrorist group Al-Shabaab still poses a major threat to state security. Large numbers of refugees occupy makeshift camps in extreme poverty with no access to clean water. Only 20 intensive care beds are available in the country, and obtaining necessary amounts of Personal Protective Equipment (PPE) and ventilators seems impossible under current conditions.

Given the dire circumstances, the Somali government has struggled to adequately respond to the growing pandemic. After a Somali MP died of COVID in London, the Somali government issued a curfew on April 15th as it began to lock down parts of society. The majority of the Somali budget and infrastructure is heavily subsidized by foreign aid. Even after the US Congress forgave $1 billion of Somali debt, the finance minister estimated fighting the pandemic would require an additional $240 million in stimulus.

Despite these complications, the country has taken some positive measures. In response to Al-Shabab’s popular rhetoric of COVID-19 conspiracy theories, the government created a so-called “anti-corona army.” This is a collection of imams, clerics, and other religious leaders that use megaphones, prayer services and mosque speakers to inform and warn communities about the coronavirus. Also, the Somali National University volunteered 20 doctors to help medical staff in Italy, in spite of conditions faced at home.

Côte d’Ivoire has one of, if not the highest, recorded number of COVID-19 cases in West Africa. A total of 638 confirmed cases and 8 recorded deaths. The country faces much of the same issues as the rest of the continent: lack of infrastructure, rampant poverty, and an inept government leadership. Even so, the Ivorian government has taken preliminary steps such as restricting movement, airport screenings, as well as basic health and sanitation training.

A big issue in Cote D’Ivoire, as with some other regions of Africa, is the misinformation surrounding the COVID-19 virus. While mostly relegated to the Internet in the West, misinformation about the virus has had real-world impacts in Côte D’Ivoire. In the recent past, a storm of local Ivorians staged an unprecedented attack, and destroyed a coronavirus testing center in the Abidjan suburb of Yopougon. The panicked crowds were stoked by fears that the center would bring infected patients into the community. They have misunderstood the fact that the center was merely a testing site, rather than an isolation or treatment unit.

The government has responded by employing 50 youth bloggers to identify and respond to online fake news, in partnership with UNICEF. Additionally, the government expanded its Public Health Response Plan by 25 billion CFA and earmarked additional funds to stimulate the economy during the pandemic. The Ivorian government is also promoting a UNICEF Distance Learning program titled “Mon école à la Maison.” This includes an intuitive Mobile SMS-based learning system that is free to all Ivorian students.

Despite these preliminary responses, the government still faces large hurdles in combating the virus. The country is still reeling from a 2011 Civil War, as well as the highly controversial re-election of long-term President Alassane Ouattara. Observers are hopeful that these domestic issues will not further inhibit an effective governmental response to the pandemic. 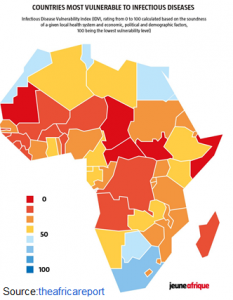 Across the continent, all African governments at the least, have taken basic preliminary precautions against the coronavirus. Massive spikes like those in Italy, Spain, and the United States have not occurred. Many African countries do have the advantage of acquired experience from tackling previous epidemics. The AIDS crisis in Botswana, cholera outbreaks in Somalia, and the Ebola pandemic have all given governments and citizens the experience of living and responding to the unique challenges of a pandemic.

It is important to note that as more advanced economies in the EU and USA overwhelm the global supply chain for PPE and ventilators, the availability of this equipment per capita in most African countries will remain at dangerously inadequate levels. This could result in exponentially more drastic outcomes for most African countries, should the COVID-19 epicenter transfer to the continent. Somali President, Mohamed Abdullahi Mohamed best illustrates this point. “This is a disease which has overwhelmed a more sophisticated healthcare system than ours,” he points out. In the end, the global health community should pay closer attention to what is happening in Africa and work quickly to deploy necessary resources and personnel in order to forestall the worst of COVID deaths on the continent of Africa.