Disclaimer: This article does not state or reflect the views or opinions of the U.S. Government or USAID. If you require more information on USAID, please visit www.usaid.gov. This article also acknowledges the contribution of the lead authors for the 2018 USAID report.

When assessing the performance of measures designed to combat food insecurity in Niger and the greater Sahel, it is critical to consider the implications of Niger’s rising population and climate change on the future food security situation in the country. With an annual population growth rate of almost 4 per cent, Niger is one of the world’s fastest-growing populations and the most rapid in the Sahel region by a substantial margin according to data provided by the World Bank. As the government of Nigerien President Mahamadou Issoufou has been mostly ineffectual in responding to this explosive population growth, Niger’s expanding population base is likely to exacerbate efforts to address food insecurity in the country.

The forces of climate change and population growth represent a substantial threat to Nigerien society. A steady decline in available farmland often aggravated by climate change, in concert with growing population pressure, will worsen an already precarious food security situation in Niger. These complications necessitate development interventions and investments by international donors to improve the food security of the Nigerien people.

In January 2018, USAID released a final report, the Summative Performance Evaluation of Food for Peace Title II Activities LAHIA, PASAM-TAI, and Sawki in Niger. This article will abbreviate the name of the final report to project evaluation (PE). The content of the PE included:

Conclusions and recommendations focus on the design of future activities to achieve food and nutrition security and strengthen the resilience capacities of households and communities in Niger and the Sahel region. The results, conclusions and recommendations of the report targeted USAID (USAID/FFP/Washington, USAID/Niger, FFP West Africa Regional Office, and the FFP learning network) and the three lead implementing partner organisations (CRS, MC, SC) and their sub-partners, as well as the Nigerian government and key officials within relevant ministry offices.

This report provides key findings of the three USAID DFSAs in Niger, based on five evaluation questions that address overall achievements, effectiveness of interventions, sustainability of outcomes, positive and negative unintended consequences, and lessons learned and best practices to consider for scaling in future DFSA programming strategy.

This article will address only the overall achievements section of the report, based on the triangulation of quantitative and qualitative data gathered from baseline and midline household surveys, key informant interviews, and community focus group discussions.

The report assesses overall achievements of targeted DFSA interventions is several sector-specific areas including (1) agriculture and livelihoods, (2) water, sanitation, and hygiene (WASH), (3) food security, (4) maternal and child health and nutrition, (5) poverty, and (6) cross-cutting gender issues. The capacity of local governance structures to strengthen community and household resilience is also a cross-cutting objective that is examined in the report. Data findings for each targeted sector, derived from a baseline and midline population-based survey (PBS) are summarised below and supported by figures with quantitative findings.

Agricultural initiatives in the DFSA activities focus on improving agricultural technology and techniques in the target communities. Additionally, increasing farmers access to financial services and other income-generating activates was also part of these initiatives. The PE finds a significant increase in farmers using improved techniques and resources at the end-line (figure 1). Data collected from the group discussions (GD) and Key-Informant Interviews (KII) show an increase in the overall food production in populations targeted in all three activity areas. Both male and female participants said they benefited from the outcomes, with satisfaction in both the increased crop yields and improved livelihoods as a result of the increased food supply.

Figure 1: Endline to Baseline Change on Agricultural Indicators, by DFSA 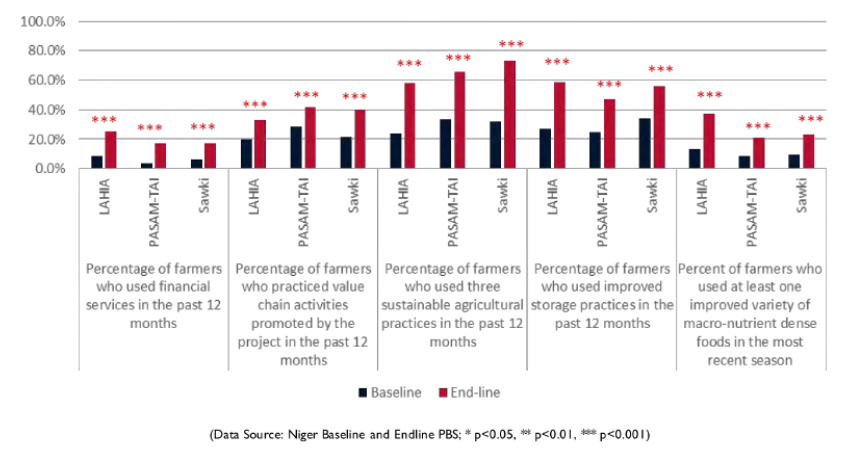 The Water, Sanitation and Hygiene (WASH) component of the DFSA activities attempted to improve the sanitation conditions and hygiene standards of the targeted communities. Overall, the WASH sector increased the use of improved sanitation facilities in the three activity populations. Although general increases were observed across the activity zones, the PASAM-TAI and Sawki activities only showed marginal increases in the use of improved sanitation facilities (Figure 2). There were some difficulties in implementing the WASH sector, with the costs of building and maintaining the latrine and sanitation facilities proving a considerable hurdle. The activities, in some instances, did not provide or subsidise material or labour for these facilities. The high cost of materials for latrine construction was a significant barrier to many households’ participation in the activities, reflected in the negligible gains observed in the Sawki activity area. 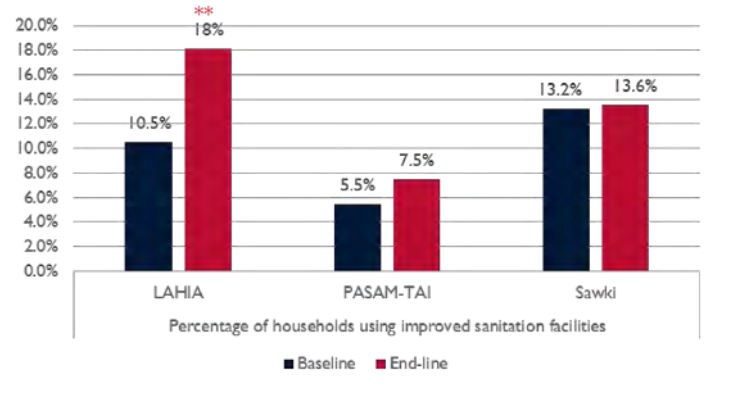 The food security aspect of the three activities was aimed at improving both the nutritional intake of the targeted populations and the prevalence of severe or moderate hunger. The PE reported a general improvement in the population’s dietary diversity score and GD/KII findings communicated a greater understanding of eating a varied diet (Figure 3). The prevalence of moderate or severe hunger decreased significantly in the LAHIA households but showed minimal change in the PASAM-TAI area; the Sawki area experienced a small increase in this parameter (Figure 4). Despite considerable success in catalysing tangible improvements in yields, the initial food security scenario in each activity area was such that even the substantial gains the activities oversaw were insufficient to ensure year-round food security for many households. Furthermore, the ability to eat a more varied diet could only be met by households with an income capable of purchasing the necessary produce. 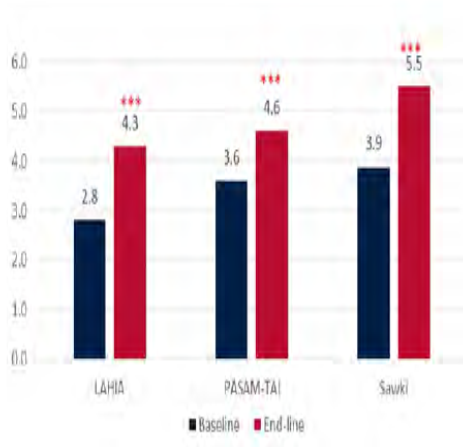 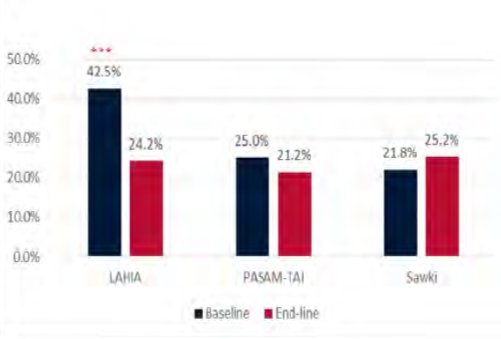 The integral hypothesis to the construction of each DFSA comprised the improvements in food and nutrition of women and children to facilitate several subsequent improvements of food security and societal structures in the three target populations. In general, this was supported by the Women’s Dietary Diversity Score (WDDS) and backed by GD/KII findings, in which there was an increase in women’s nutritional health in all three DFAPs. Additionally, KII indicated that men and other family members began to see the importance of women’s health issues in each activity area, showing that the goal of increasing women’s status was successful. Regarding children’s health, the PE indicated more mixed results in combating malnutrition and diarrhoea. The quantitative data showed that some general decreases in malnutrition indicators, yet the prevalence of diarrhoea and the use of treatments was less profound and showed an increase in diarrhoea in some areas (Figure 5). 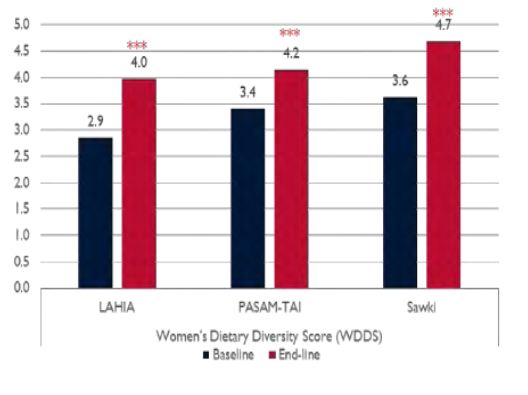 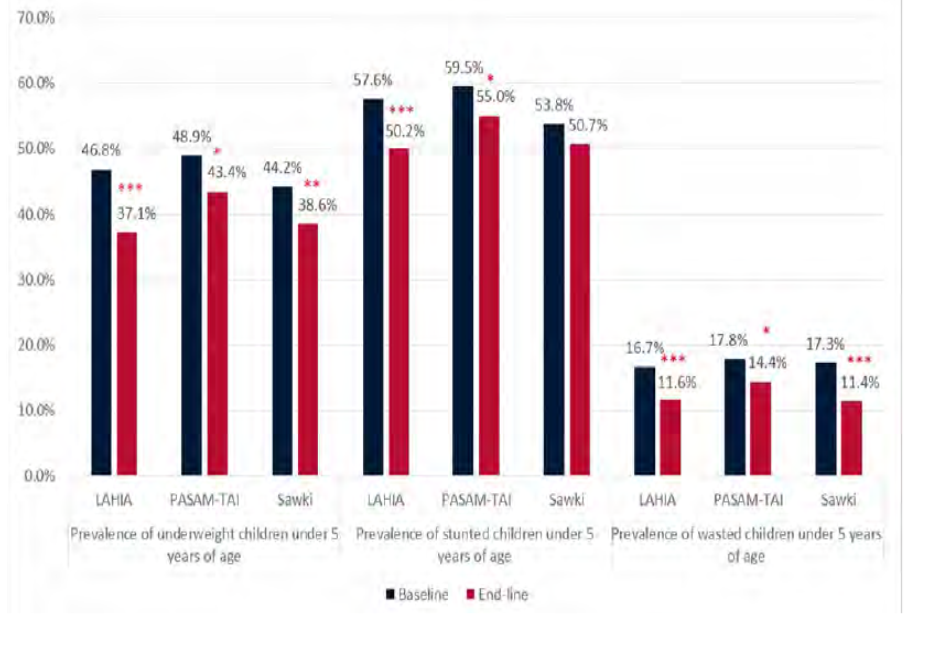 By increasing access to financial services and access to markets; the DFSAs attempt to reduce economic poverty in the target populations. The LAHIA and PASAM-TAI activities showed marginal and negligible decreases, respectively, in both the prevalence of poverty (Figure 7) and the mean depth of poverty (Figure 8). The Sawki activity area experienced a slight increase in these poverty indicators. Participants conveyed difficulty in accessing credit and getting their products to market. Additionally, the devaluation of the Nigerian CFA negatively affected farmers ability to export products across the border to Nigeria.

Figure 7: Prevalence of Poverty: Percent of People Living on Less Than $1.25/Day 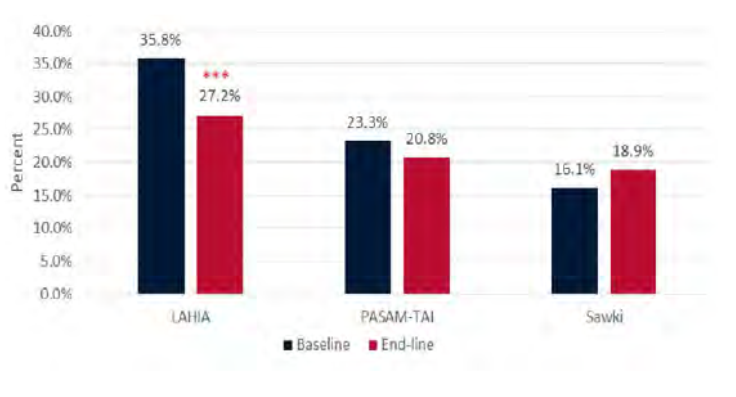 A secondary goal of the DFSAs was to further the status of women within the target populations. In concert with the overall goals of WASH and food security, the activities attempted to increase awareness about women’s health and emphasise the role of women in household decision-making (Figure 9). According to GD and KII findings, participants mentioned a noticeable change in community attitudes toward women’s health, as well as their role in the household. Despite the success of the DFSAs in the pursuit of this objective, it must be noted that acknowledgement of the role of women in society had a high starting baseline in each activity area; the activities thus had less scope to achieve significant improvement on most gender parameters throughout their period of operation. 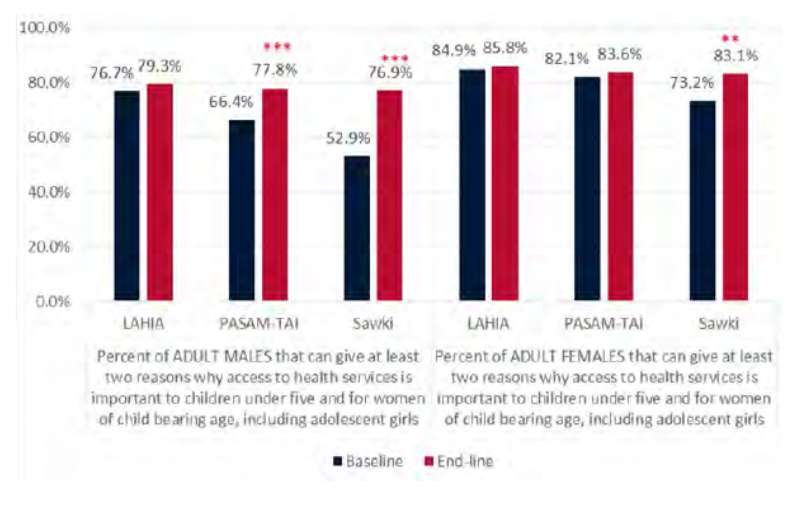 The PE concludes that the overarching goals in the technical sectors of each DFSA food security activity were met. The activities achieved notable increases in the use of improved agricultural techniques and technologies, as well as significant behavioural changes within activity areas. The use of improved seed types, fertilisers and storage practices were instrumental in increasing food stability for more prolonged periods within the targeted communities. The poorest households within the activity areas demonstrated a tangible improvement in food security as a result of a combination of agricultural changes and the dietary activities targeting women and young children. Furthermore, PBS analysis suggests a high frequency of positive spillover effects observed within local non-intervention villages; several individuals have adopted the agricultural and nutritional practices taught in DFSA activities.

Any evaluation of these FFP activities must recognise the lack of uniformity within the baselines of each activity. Areas, where activities could be seen to have underperformed upon initial observation, must have their baselines accounted for; an example would be the Sawki area experiencing a slight increase in the prevalence of moderate or severe hunger.

While there was a success in reaching the general targets for each of the DFSA activities, there were several roadblocks and underwhelming results according to poverty indicators in certain areas. The implementation of value chain development and other income-generating activities (IGA) increased the usage of financial resources among the activity populations, yet these gains were small compared to the expected target goals. In the WASH sectors, problems were also encountered. While populations did adopt and use the sanitation practices taught in DFSA activities, building and maintaining the latrine and sanitation infrastructures was a vital issue noted in the Final Report. The considerable breadth of these activities meant that, although they were overall largely successful, the underachieved areas need addressing within specific activity areas.

Future Recommendations for USAID in Niger

According to the PE, the three DFSAs targeting communities in south-eastern Niger appeared to have succeeded in having a positive impact on the food security situation in the country. Critically, GD and KII findings indicate significant sustainability of achievements, especially in instilling positive social behaviour change in the areas of agricultural practice and maternal and child health and nutrition. While the PE indicates that each activity did see an increase in usage of the practices taught, there is still room for improvement and revaluation. As per its recommendations, the PE suggests that DFSA activities should be reduced in scope to focus more on depth than breadth as a practical implementation model that is tailored more at individual beneficiaries based on their financial and other resource capacities in each community. The enactment of the model would reduce the scope for underachievement in activities by permitting a more intense focus on specific target areas. Given the successes in the agricultural and food storage sectors and its positive spillover effects, WASH and gender sectors could adopt a more scaled approach. Specifically, they could increase accuracy by reflecting the specific resource capacities, needs, and demands of a household and community before implementing an activity. Such an improvement could potentially replicate the positive spillover effects observed in some activities. Finally, future DFSA operations need to conduct more in-depth research in targeted sectors such as community sanitation and market systems in order to better identify gaps and strategies for more effective implementation of the next DFSA program cycle in the region.