In the early 2000s, a natural resource called coltan suddenly moved from obscure geological publications into wide public spotlight. Coltan, also known as columbite-tantalite, is an ore from which a chemical component tantalum is extracted. Tantalum is widely used for information and communication technologies and is in high demand from tycoon companies like Apple and Samsung.

While developed countries dominated the production of tantalum until the early 2000s, production today is led by the Great Lakes Region of Africa. Figures 1 and 2 show that particularly since 2007, the major sources of tantalum transferred from Australia and Brazil to the Democratic Republic of Congo (DRC), Rwanda, and some other African countries. Although the natural resource proffers financial prosperity, countries need to ensure low governance risk, modern mechanised mining and advances processing technologies, and a transparent supply chains to maximise the benefits. On the other hand, countries with poor governance, artisanal mineral production techniques, and far less transparent supply chains, will as a result, contribute to the fuelling of conflicts that sacrifice millions of lives, as has been seen in the DRC.

Indeed, at the beginning of the twenty-first century, the DRC, Rwanda, and their surrounding countries were not globally significant sources of tantalum, they accounted for only 2% of the world supply. Today, the region has evolved to become the world’s largest tantalum producer. 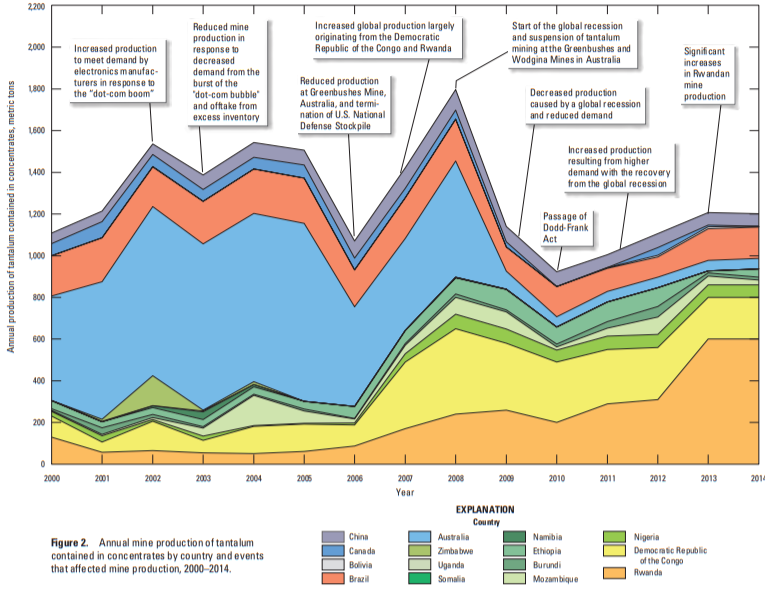 Coltan is now considered a conflict resource. The main conflict resources are identified by the United States legislation as three-Ts (3Ts). They include cassiterite (tin), coltan (tantalum), wolframite (tungsten) and gold. Furthermore, the United Kingdom government defines conflict resources as “minerals mined in conditions of armed conflict and human rights abuses, and which are sold or traded by armed groups.”

The complications surge from the overall resource’s global market. Unlike most other base and precious metals, tantalum concentrates are not publicly traded through commodities exchanges. According to senior writer Lynnley Browning, “[tantalum] is bought and sold through shadowy networks of dealers, so its origins are easily disguised.” Browning adds that the product is then smelted in countries like China, Kazakhstan and the US, “sold to manufacturers that make capacitors, high-tech devices that hold electrical charges and are essential to everything from iPads to airplanes.”

A 2003 United Nations report, stated that the smuggling and exploitation of the extracted tantalum has helped fuel the Second War in Congo. The crisis has resulted in approximately 5.4 million deaths since 1998. Since then, ethical questions have been raised about responsible corporate behaviour, human rights, and endangering wildlife.

These accusations prompted the passage of legislation around the world to curb the procurement of these mineral commodities. Several countries adopted numerous approaches to ensure their chain supplies were not procuring resources from conflict-affected and high-risk areas.

Global approaches to auditing supply chains
There are several important decisions made to tackle the supply of conflict minerals. In November 2010, during the International Conference on the Great Lakes Region (ICGLR), eleven of its member states endorsed the OECD Due Diligence Guidance. The guidance is responsible for providing recommendations for companies to respect Human Rights and avoid contribution to conflict through the purchasing of resources like tantalum from war-torn areas. The same year, the Obama administration introduced the 2010 Dodd-Frank Wall Street Reform and Consumer Protection Act, which requires companies that source tantalum, tin, tungsten, and gold (3Ts) to perform diligence on their supply chains.

In 2012, Apple reported the largest quarterly profit of any company in corporate history. The tech corporation went an extra mile beyond the Dodd-Frank Act. As the initial rule requires the US publicly traded companies to audit their supply chains and disclose any use of conflict minerals, Apple also disclosed the names of the smelters. Auditing procedures ought to require a stronger approach. For example, smelters in China and Russia are opaque and vulnerable to corruption. Sasha Lezhnev, who oversees DRC conflict minerals, said that “we’re concerned that the audit procedures are not as transparent as they should be.”

China adopted their own Diligence Guidelines in December 2015 based on the OECD Guidance. Beijing guidelines are designed to align Chinese companies due diligence with international standards and allow for mutual recognition with existing international initiatives and legislations. Subsequently, In 2017, the European Union adopted the Regulation 2017/821. EU’s directive lays down supply chains due diligence obligations for its importers of T3s originating from conflict-affected areas in compliance with the 5 steps of the OECD guidance. The EU’s regulation will enter into force from the beginning of 2021.

Another resolution was adopted by forty-seven delegates representing 72 nations assembled in Livingstone, Zambia. The Mosi-oa-Tunya Declaration 2018, requires regional and international private sector to ensure production and sourcing practices do not contribute to adverse Human Rights or conflict in supply chains of T3.

Overall, the Information Age has committed the world to digital dependence, meaning that the supply and demand of resources like tantalum will only increase in the coming years. This is especially due to the fact that global powers like the US, EU and China are highly reliant on tantalum to meet industrial and strategic development requirements. This necessity leads to an increase in vulnerability to the effects of supply disruptions. Yet, limitations to the procurement of the conflict resources could also result in further economic hardship for the people living in the T3-rich countries. Professor Raimund Bleischwitz suggests that “putting the raw conflict material into the framework of sustainable resource management and international governance for trade in natural resources is a better way forward.” Currently however, countries like the UK, still lack official regulations of their own to resolve the protracted issue of conflict mineral distribution. This begs the question that perhaps the solution may not occur so easily, considering the increasingly complex socio-political situation in the African Great Lakes region and the high demand for the mineral elsewhere due to rapid technological advancements.