With less than a year to go until Brexit happens, there’s little evidence to suggest that voters have changed their minds about the referendum. But there has been an important shift in voters’ attitudes towards immigration.

Brits are now more positive about immigration than they were before the UK voted to leave the European Union in 2016, according to a recent survey by pollster Ipsos MORI. Some 44% of respondents say that immigration’s impact on the UK has been positive—a jump from 2015, when just over 30% of people surveyed said the same thing.

The polling firm points to two reasons for the shift. First, 39% of respondents say that the Brexit vote has since highlighted the contribution immigrants make to the UK, while 41% are more positive because they feel more reassured that immigration has or will come down.

The poll echoes the results of an Ipsos Global survey published at the end of last year. In that survey, the number of British respondents who said that immigration has had a positive effect on their country jumped from 19% in 2011 to 40% in 2017. 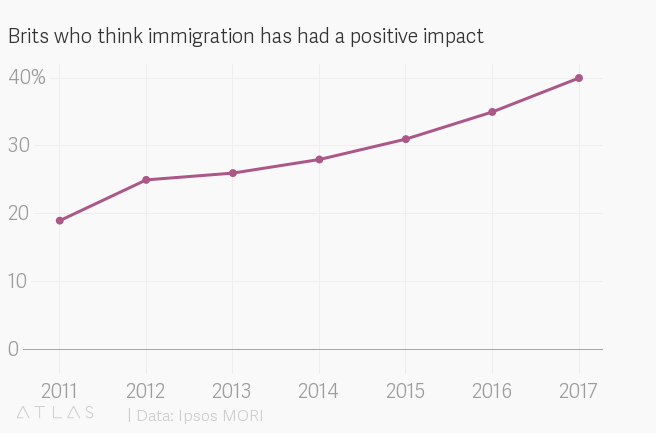 Overall, 21% of all respondents said that immigration has had a positive effect on their country compared with 42% who say it has had a negative impact. The survey, which was conducted in 25 countries, found Britain to be the third most-positive country about the impact of immigration. 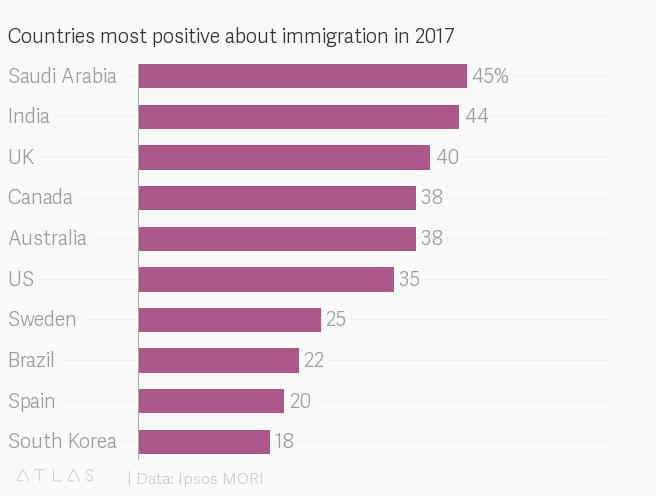 While there have been slightly more positive views towards immigration, this hasn’t translated to people wanting to see an increase to immigration. The Ipsos MORI survey found that the majority of the public still wants to see immigration levels reduced (56%) and wants the government to remain tough on illegal migration.